Girls need curls, too! If you want to really rock that tank top at the gym or go sleeveless during summer, then doing the best arm exercises for women is a must. Learn all about arm training and try three full workouts to sculpt your arms!

Arm day is constantly dubbed every guy’s favorite day in the gym, perhaps second only to training chest. As a longtime pro bodybuilder, though, I think most guys are guilty of overtraining their arms—giving them far more volume than they need to grow—and just as many women undertrain theirs.

This is unfortunate! To many women are fixated on how to lose arm fat, rather than building the arms they want with strategic, well-designed workouts. Instagram might convince you to emphasize training only your lower body and abs, but overall muscle development is essential! And if you’ve been struggling for years to get that first pull-up, training your arms can definitely play a part in getting there.

Got your attention? Then let’s get serious about biceps and triceps workouts for women!

Arm Yourself With Education 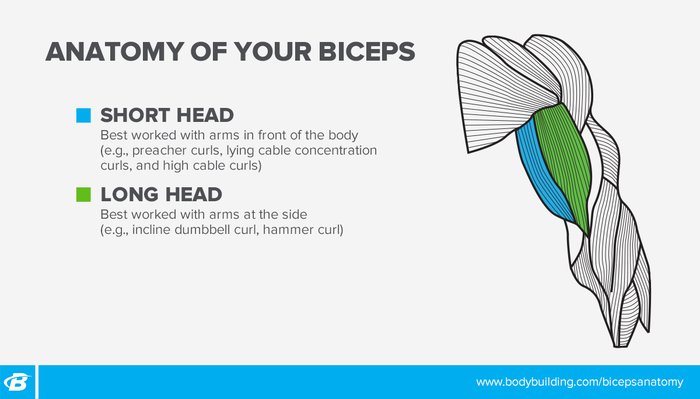 Biceps: The biceps brachii and the brachialis are the two big muscles on the front part of the upper arm. The name comes from the Latin “biceps” meaning “two heads” and “brachii” meaning “of the arm.” The two heads are generally known as the long head and short head of the biceps.

The biceps brachii has two functions. The first is to bend or “flex” the elbow, like when you pop that biceps pose. The second is rotation of the forearm, which is why coaches often cue to rotate a weight as you curl it.

Training at home? Arm your gym with a complete set of dumbbells and reap the benefits daily.

Triceps: The three heads of the triceps are the long head, the lateral head, and the medial (deep) head. As women age, we tend to hold more body fat in this area, making triceps development more of a priority as the years pass.

The long head of the triceps sits right in that troublesome posterior part of the upper arm. So, while the guys might focus on the horseshoe shape and thickness that develops the lateral head, women may want to prioritize long head exercises.

In doing this, it’s important to remember that shoulder extension is ideal for long head activation. This means any exercise where the arm goes behind the body, such as in a triceps kick-back or a single-arm cable push-down. It also means keeping your form as perfect as possible on any overhead extension or dip. 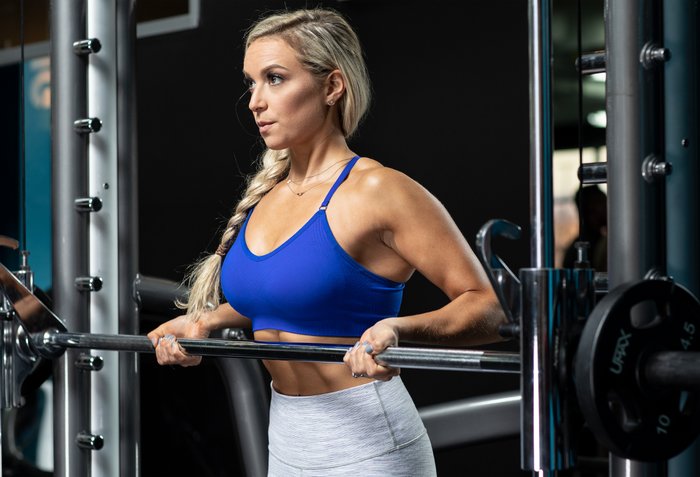 Do I Need An Arm Day?

As a rule, for the first year of serious lifting, it’s great to partner arm exercises with a larger muscle group. This could mean full upper-body workouts, or classic pairings like back-and-biceps and chest-and-triceps or shoulders-and-triceps. These approaches are popular because they work! They give you enough stimulus to grow without overdoing it and risking a tendon injury—which takes a long time to heal and is a common curse of the newbie lifter.

Beginner Arm Workout for Women
Use this workout immediately after training a larger muscle group like back or chest. Keep your form strict!

No bodybuilder was as renowned as Arnold for his huge arms and massive delts. And no bodybuilder trained as hard. Here’s his blueprint and workout for world-class upper-body development!

Few bodybuilders are made in the mold of Arnold Schwarzenegger. Sure, everyone wants to be the next Arnold, but who could conceivably duplicate the mind-numbing training volume and frequency he achieved? He didn’t just train shoulders and arms for 60-plus sets—he did it 2-3 times a week with incredible intensity!

That’s one reason “The Oak” stood out among his peers. Where others would call it quits, Arnold took pleasure in his own pain. While this kind of volume can’t be sustained long-term, it certainly can flip your personal anabolic switch and help you dial in your ideal physique—provided you can learn to love a bone-crushing delt-and-arms workout.

Here’s a blueprint of how Arnold trained these body parts!

Arnold trained shoulders with the same high-volume approach he employed with other body parts, ensuring that each deltoid head was targeted from different angles. Because multijoint presses from the front of the neck recruited the anterior (front) delts to a greater degree than behind-the-neck presses, he typically included both in his shoulder workout for maximal development.

“There’s no one exercise that will work all three areas of the deltoids,” Arnold once said. “Therefore, when you’re planning your shoulder routine, you have to include the right variety of movements, so that you get full shoulder development.”

His full-throttle approach occasionally meant that he did 50 or more sets in a single workout! Remember, too, that Arnold trained shoulders with arms at least twice per week—an impossibly challenging combination of volume and frequency that helped build the biggest delts the world had ever seen at the time.

Here are some of the basic principles Arnold followed when training shoulders:

3,101 Views Are you looking to build a website from scratch? Building a business or personal website used to be quite challenging in the past, especially if you weren’t a tech-savvy person. The good news is, with all the different options available on the internet today, starting a website has become extremely easy for anyone, even…

3,637 Views Running a website or blog takes a lot of hard work. Every day, site owners are expected to put in a lot of time and effort in organizing content, links, and traffic to ensure that their websites are successful. The only way to make sure you cover all grounds is to use all your…

2,988 Views No bodybuilder was as renowned as Arnold for his huge arms and massive delts. And no bodybuilder trained as hard. Here’s his blueprint and workout for world-class upper-body development! Few bodybuilders are made in the mold of Arnold Schwarzenegger. Sure, everyone wants to be the next Arnold, but who could conceivably duplicate the mind-numbing training volume…

2,374 Views There are various online tools that offer multiple solutions for your business. When selecting these tools, you need to settle on the one that provides the most functionality and makes it easier to run your business. Furthermore, your choices should be guided by your business needs. ClickFunnels and Kartra are high performing tools with little…

3,031 Views Iconic, fun-to-drive hatchback now with green credentials. Make : Mini Model : Cooper ContentsWe LikeWe Don’t LikeWhat is it like to drive?What is it like outside?What is it like inside?Should I buy one? We Like Fun to drive Oozing with character Zippy performance We Don’t Like Limited usability Expensive What we have here is a rather…

We use cookies on our website to give you the most relevant experience by remembering your preferences and repeat visits. By clicking “Accept All”, you consent to the use of ALL the cookies. However, you may visit "Cookie Settings" to provide a controlled consent.
Cookie SettingsAccept All
Manage consent

This website uses cookies to improve your experience while you navigate through the website. Out of these, the cookies that are categorized as necessary are stored on your browser as they are essential for the working of basic functionalities of the website. We also use third-party cookies that help us analyze and understand how you use this website. These cookies will be stored in your browser only with your consent. You also have the option to opt-out of these cookies. But opting out of some of these cookies may affect your browsing experience.
Necessary Always Enabled
Necessary cookies are absolutely essential for the website to function properly. These cookies ensure basic functionalities and security features of the website, anonymously.
Functional
Functional cookies help to perform certain functionalities like sharing the content of the website on social media platforms, collect feedbacks, and other third-party features.
Performance
Performance cookies are used to understand and analyze the key performance indexes of the website which helps in delivering a better user experience for the visitors.
Analytics
Analytical cookies are used to understand how visitors interact with the website. These cookies help provide information on metrics the number of visitors, bounce rate, traffic source, etc.
Advertisement
Advertisement cookies are used to provide visitors with relevant ads and marketing campaigns. These cookies track visitors across websites and collect information to provide customized ads.
Others
Other uncategorized cookies are those that are being analyzed and have not been classified into a category as yet.
SAVE & ACCEPT